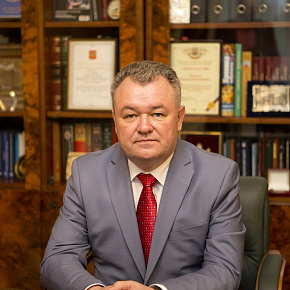 Born 10 January 1961. Viktor Blazheyev graduated from the All-Union Extra-Mural Law Institute in 1987 and defended his PhD in Law in 1990.

Mr. Blazheyev worked as a lecturer since 1990, later – as a senior lecturer and associate professor of the Civil Proceedings Department. Starting from 1994, he has been combining teaching activities with various administrative positions at the MSAL. Viktor Blazheyev held the office of the Dean of the full-time faculty, in 2002 he went on to become the First Vice-Rector for Education and headed the Civil Proceedings department since 2003. Since mid-1990s, Mr. Blazheyev has been member of several teams of contributors for textbooks and tutorials, and provided theoretical and practical annotations to the legislation published by the Department for Civil and Arbitration Proceedings. He is also the author of an advanced course in Arbitration Proceedings.

Rector of MSAL (renamed as Kutafin Moscow Law University in 2012) since July 2007.

Viktor Blazheyev has taken an active part in developing the federal laws “On Advocacy”, “On Enforcement Proceedings” and “On psychiatric assistance and guarantees of the citizens’ rights during its rendering”. Member of the Commission for the consideration of comments and suggestions accumulated during the hearings of the federal draft law “On Education in the Russian Federation”. Mr. Blazheyev regularly provides consulting support to law enforcement and other authorities.

Holder of a number of state decorations including the second-class medal of the Order of Merit for the Motherland” (2013) and the medal “20 years of Federation Council” (2014). Winner of the highest-ranking legal award “Lawyer of the Year” in the special category “For the Contribution to the Development of Civil Society” (2012).